Workplace Harassment – Ways to Nip it in the Bud 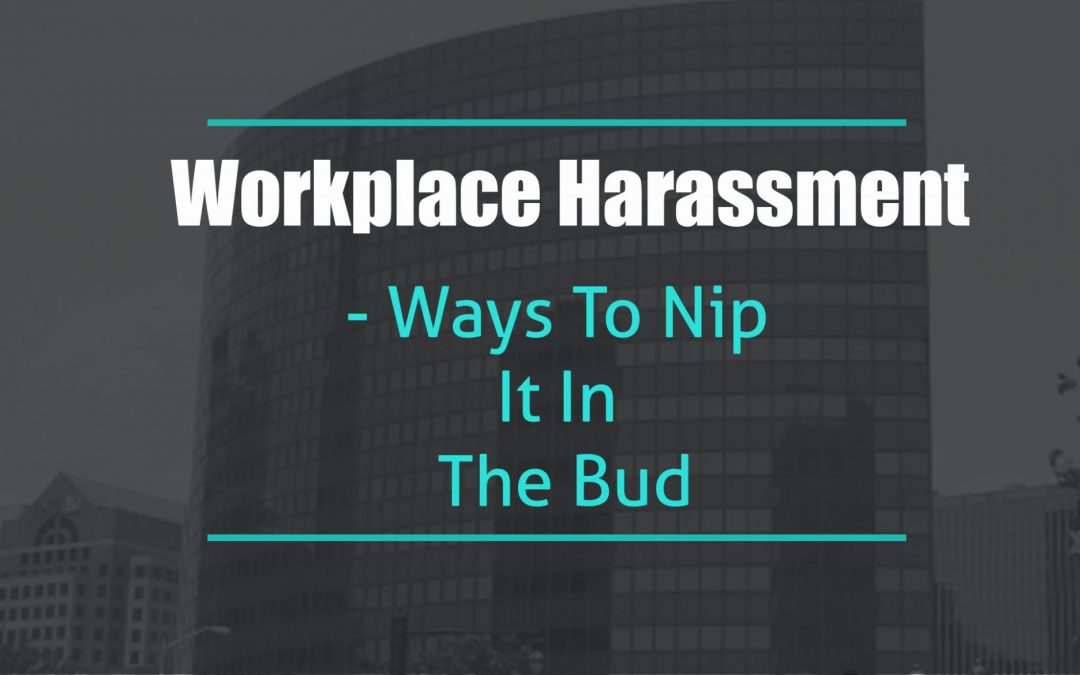 Workplace Harassment – Ways to Nip it in the Bud

You are interested in a colleague. Which of the following options will you adopt to ensure that you do not fall foul of the provisions of the Sexual Harassment of Women at Workplace (Prevention, Prohibition and Redressal) Act, 2013 (Act)?

While each of the above actions may seemingly sound harmless, insofar it does not cause any direct/physical harm, let’s see what the Act says about these act/s:

Having the perfect workplace environment is a huge challenge, especially since workplaces comprise people from diverse cultures, backgrounds, gender and behavioral pattern. It is very difficult to predict how one person’s “harmless” intentions could cause discomfort or make another feel threatened.  There is no straight jacket formula to solve this, but measures can be adopted by employers to curb it in early phases before it becomes unmanageable.

While the Act provides for preventive mechanisms ranging from awareness building programs to having an anti-sexual harassment policy / internal committee to redress complaints, a lot can be done by organisations to pre-empt such offensive behaviour.

Let’s walk you through a few organizational Do’s and Don’ts which can go a long way in implementing the true spirit of the Act.

The behaviour of employees is often guided by the behaviour of the leaders and we often find that employees in managerial or even senior leadership positions are unaware of what constitutes sexual harassment. It is therefore, imperative that every organisation lists out actions which can potentially be construed as offensive – even if they are not directly within the purview of the Act. These should be communicated across levels regularly, starting with the induction programme. Organisations should have a “zero-tolerance” policy towards improper conduct and the communication has to be so lucid that there is no ambiguity in the minds of employees on what improper conduct is. For example, professional organisations usually make it clear that any kind of remarks relating to appearance amounts to improper conduct. For example, a male manager in a BPO tells a female team member, “you look like you have lost weight, you look so much better now”. To start with, it is none of the manager’s business. Further, it can be construed that the manager will favour female employees who look a certain way. Most importantly, most employees will find such comments from a manager intrusive and personal, something which needs to be avoided in a professional setup. While all of this may seem straightforward, as members of Complaints Committees, we often find instances of similar conduct by managers. When confronted, the manager usually feigns surprise that his comments were “misconstrued”.

Maintain open lines of communication with your employees:

Keep the lines of communication open so that your employees can reach out to you easily. Encourage employees to speak up about unprofessional conduct, whether they are facing it themselves or witnessing some colleague doing so. Monitor your workplace.  Talk to employees more often especially asking them about what they feel about the work environment. Look around the workplace itself. Do you see any offensive posters or notes? Talk to your supervisors and managers about what is going on. Drill awareness down through all levels. Take immediate and decisive action in instances or complaints involving sexual harassment. Employees should feel that the organisation is sensitive to harassment-related issues. And the best way to ensure that is by taking action when the issue is still in its early stages. We have seen many organisations waiting for issues to snowball and then follow the requirements of the Act only in letter and not in spirit. This inevitably leads to employees feeling discouraged to share genuine concerns and finally deciding to leave.

Websense the content which in viewed in office computers and laptops

Showing/viewing pornography amounts to sexual harassment under the Act. And while in today’s day and age it might be difficult from stopping employees from accessing such material on their personal electronic devices, ensuring that they cannot do so using office internet or wifi or on their official computers is a good way of making sure that such behaviour is discouraged. It is also important to make sure that the first instance of viewing/sharing/showing of material that can be considered obscene is dealt with immediately and firmly. An occasional audit of hard drives and other storage devices is also a good way to check whether objectionable content is being viewed by employees. Do not encourage unsuitable/inappropriate jokes or posters, graffiti, e-mails and photos at workplace and clearly define the outcome of such instances. Many organisations today use chat tools such as Whatsapp to run semi-official groups. The content of such groups needs to be strictly monitored as well.

Reiterate the code of conduct at regular intervals

At regular intervals and particularly before social events organized by the workplace such as team gatherings / office parties / offsite / business trips arrange a quick meeting reiterating that such events are an extension of the office and clarifying that employees are expected to demonstrate the same level of professional conduct as inside office. This is particularly important where alcohol is a part of the event, as it often is. Employees should not be under any misconception that bad behaviour will be tolerated merely because they were under the influence of alcohol.

It is possible that two consenting adults may be in a relationship in the same organization. In such situations encourage both parties to sign consensual agreement forms. Try and put such people in separate team and if the relationship ends, it is advisable to ensure that they are not in a position where they can retaliate against the other.

There are many more steps which an employer can potentially implement to ensure that the Prevention of Sexual Harassment Act is actually being upheld in spirit and not just in the letters of unused policies and disinterested Complaints Committees.

To know more about compliances which you need to action out to make your workplace a better one, please feel free to contact us at inquiries@lexplosion.in

All material included in this blog is for informational purposes only and does not purport to be or constitute legal or other advice. The Blog should not be used as a substitute for specific legal advice. Professional legal advice should be obtained before taking or refraining from an action as a result of the contents of this blog. We exclude any liability (including without limitation that for negligence or for any damages of any kind) for the content of this blog. The views and opinions expressed in this blog are those of the author/(s) alone and do not necessarily reflect the official position of Lexplosion. We make no representations, warranties or undertakings about any of the information, content or materials provided in this blog (including, without limitation, any as to quality, accuracy, completeness or reliability). All the contents of this blog, including the design, text, graphics, their selection and arrangement, are Copyright 2018, Lexplosion Solutions Private Limited or its licensors.

ALL RIGHTS RESERVED, and all moral rights are asserted and reserved.